Thought I'd Throw A Little Humor Out...

I figure with all the depressing things coming from the current Socialist Administration, I'd throw out a little humor to take the bite away. Question is, doe's anyone have a real sense of humor anymore? 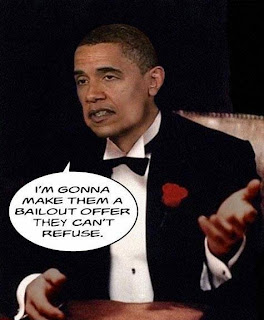 Bet there are some Bankers that can relate to this... 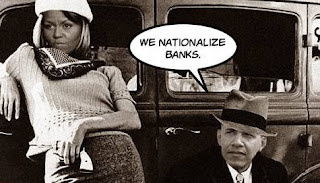 Except I liked Bonnie and Clyde... 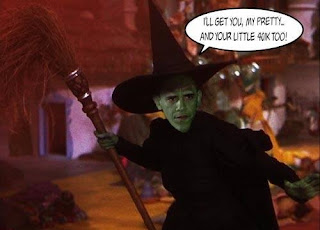 
Now keep in mind, this was done in good humor. If we can't laugh at the things that are happening in our lives, we would probably cry or worse. So keep a smile and keep the good fight against the changes that we don't need in the Country...
Posted by oldhippiecom at 13:08 No comments:

Email ThisBlogThis!Share to TwitterShare to FacebookShare to Pinterest
Labels: Humor

I thought I'd have some fun with a little comparison between what is going on in this Country today and one George Orwell speculated about in his book, 1984.

(Doublethink: The acceptance of two contradictory ideas or beliefs at the same time)

When you hear from BHO on one day that the "New and Improved" Health care will only cover about 33%, at only the "Low" cost of 1.3 Trillion. Now it seems it will cover 98% and only 400 Billion after the Savings from Medicare. Savings from Medicare? I believe Webster might define that as an OXYMORON


Then there's "Newspeak"
(Newspeak: An official or semiofficial style of writing or saying one thing in the guise of its opposite, esp. in order to serve a political or ideological cause while pretending to be objective, as in referring to “increased taxation” as “revenue enhancement.”)


Tell me "Crimethink" or "Thought Crime" isn't happening as we speak.
(Crimethink: the Government not only attempts to control the Speech and Actions but also the thoughts of it's subjects or populace)

This could best be represented in the "Fairness Doctrine" that the Socialist Party wants. When Left Wing Radio fails at every try, then it is necessary block Right Wing Radio from being heard. Or you can force the people to pay and listen to Right Wing Radio to make it more Equal. (All Animals are equal, except some are more equal than others. Oops, that's from another of Orwell's books, Animal Farm)


Now we are on to the "Thought Police"
(Thought Police: The Secret Police whose job it is to uncover and punish violators of "Thought Crime" aka "Crimethink")
I think we are currently calling this one the F.C.C.

Ministry of truth
(The "Ministry of Truth" is a misnomer because what it does is repeat all information that comes from the government, be it the truth or a lie, until the people believe it)

Here is an area we can all relate to, Health care, the wars oversea, taxes etc.

Now believe me when I tell you, I am not one of those nuts who sees conspiracies at every turn. And I won't even talk about those 911 conspiracy types. I just see things from every point of view, and that can be a curse I'll tell ya.
But it does cause you to think when someone who has need dead, for longer than most of you have been alive, can show us a world that is strangely similar to our own...
Posted by oldhippiecom at 10:44 No comments:

Email ThisBlogThis!Share to TwitterShare to FacebookShare to Pinterest
Labels: Our Future?

So Who is going To Pay For Healthcare?

We have to go after these Evil industrialists. Let's take away all the incentives to grow thier companies and the JOBS that creates. Why should we leave them any money to do these horrible things? Why should we care if they are forced out of business? It's all for the good of the poor and downtrodden isn't it? (By the way, it will only cover 1/3 of the uninsured) So let's just take 55% of thier income...

Now, we can't forget the working types on this.
We are all going to have to sacrifice for the betterment of our fellow citizens. Those of you who are young and healthy, newly married without children, you to are going to help the downtrodden, how? Easy, you don't need insurance so you are going to "Donate" 2 1/2% of your income so others may have the "American Dream"! You won't need to put money in the bank, your IRA or 401 because you are Going to "Donate" for others...

Think about this for just one minute:
DO YOU WORK FOR A RICH PERSON or A POOR PERSON?
Of you tax the to death, where do you plan to work? For the Obama Administration? And pigs fly...
Posted by oldhippiecom at 14:48 No comments:

Now I don't have a Uteris so I usually keep my opinions about abortion to a close circle. But this is going to far.
Abortion is going to be part of Health Care Reform? What exactly does a woman who can't keep from getting pregnant have to do with this?
I'm sorry, but having sex is not an illness, babys are not a disease, so why am I going to pay for an abortion for some welfair type in upper NY, or southern Florida?
If this kind of stuff is passed, I fear for my Country!
Posted by oldhippiecom at 11:03 No comments:

Now, I have a better than average IQ, but what the hell is this? I have never, in my life, seen such a convoluted mess being presented to the American Public. And they, the Socialist Party, want this passed before the August Recess. I can see why they want this mess passed ASAP, if it isn't then maybe, just maybe someone will figure out that this will BANKRUPT the country.
Posted by oldhippiecom at 16:48 No comments:

Have you read the New And Improved Health Care Bill? Me Neither...

But what I have been able to glean from the most convoluted bill in the history of the Republic is, according to page 16 if you don't have your own policy by the time the Bill is passed and signed, you will be prohibited from getting it. YES you read this right, you WILL NOT be allowed to buy your own policy.

So what can you do then? Here is the catch... You can get the Government Health Policy under their rules and guidelines or get nothing... WRONG!
If you don't want to get the Government Health Care, you WILL have to PAY 2.5% TAX for the privilege of not having Health Coverage. Once again, you did hear correctly, you WILL BE TAXED 2.5% (Income that is) if you don't want coverage.
This is starting to come close to the line of: United Soviet States Of America
How long are we going to allow this to continue...
Posted by oldhippiecom at 17:23 No comments: